Exactly 70 years after the Corvette debuted at Motorama in New York City, Chevrolet has returned to introduce the first-ever electrified Corvette with all-wheel-drive and a powerful 6.2L LT2 Small Block V-8, the 2024 E-Ray.

“In 1953, the enthusiastic reaction to the Chevrolet Corvette concept kicked off seven decades of passion, performance and American ingenuity,” said Mark Reuss, General Motors president. “E-Ray, as the first electrified, all-wheel-drive Corvette, takes it a step further and expands the promise of what Corvette can deliver.”

“The Middle East is renowned globally for its appreciation of fast, powerful, beautiful sports cars and the launch of the E-Ray will take this passion stratospheric,” said Ronald Balit, Communications Director GM Africa & Middle East. “Every Corvette has surpassed the one before it and the E-Ray is no exception, bringing breakthrough electrified technology and revolutionary performance to roads in the Middle East.”

Developed to be the Corvette owners can arrive in anywhere, no matter the season, the new E-Ray — available in removeable roof coupe and hardtop convertible models — uses electrification to enhance the driving experience with intense straight-line performance and sure-footed grand touring capabilities that can only be achieved with eAWD.

E-Ray is also the only sports car pairing two separate propulsion systems to provide naturally aspirated V-8 power with electrified responsiveness powered by eAWD, making it one like none.

“Every Chevrolet Corvette since 1953 has evolved the visceral sports car formula, and the E-Ray is no exception, bringing breakthrough electrified performance technology to Middle East supercar enthusiasts,” added Balit.

The E-Ray is the quickest production Corvette in history, clocking a 2.5-second 0-60 mph time1 before breezing through the quarter-mile in 10.5 seconds1.

“Corvettes must provide an exhilarating driving experience on backroads and tracks, and E-Ray nails it,” said Tadge Juechter, executive chief engineer, Corvette. “The electrification technology enhances the feeling of control in all conditions, adding an unexpected degree of composure.”

A near immediate feeling of thrust from low-end torque is core to the Corvette driving experience, and the E-Ray packs plenty of it. Power comes from the 6.2L LT2 Small Block V-8, putting 495 horsepower and 470 lb.-ft of torque to the rear axle. It is complemented by an electric motor that channels an additional 160 horsepower and 125 lb. ft. of torque through the front wheels via a 1.9 kWh battery pack which is located between the seats. In total, E-Ray produces a combined 655 horsepower from both the electric motor and Small Block V-8. 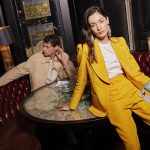